Being a part of CLARIFY proved to be enriching both in terms of technical growth and connections within the group.

Hi everybody! Today, I, Laëtitia (ESR7 ), share with you the highlights of my work since the app beginning of my thesis.

The first year as a Ph.D. student is coming to an end and being a part of CLARIFY proved to be enriching both in terms of technical growth and connections within the group. Throughout this year, I had the opportunity to have three months of secondments, both online and on-site at ROCHE and the INCLIVA, respectively. These secondments allowed me to get to know better some of the ESRs of CLARIFY and learn more about the pathology field in general. This has proved to be helpful not only to get a better overall idea of the project and its challenges, but also to define better the next steps of the project regarding artificial intelligence (AI) models. Additionally, the secondment at the INCLIVA opened the way to a collaboration with Andrés (ESR12) on the writing of a book chapter about AI for digital and molecular pathology for the Fundación Universitaria de Ciencias de la Salud (FUCS) in Colombia, pending to be published.

This year was thus useful to gain knowledge about the field and prepare the corresponding datasets that will need to be used for further applications. As a matter of fact, I worked in parallel with Andrés (ESR12) to prepare the Spitz dataset, preparing the images for the annotations on our platform as well as the patches that will be needed for future AI approaches.

As for the first steps in the development of AI algorithms applied to Spitz tumors’ analysis, a first approach was developed within the CVBLab (Computer Vision and Behavior Lab) group at the UPV, with Rocío del Amor. The resulting study, “An Attention-based Weakly Supervised framework for Spitzoid Melanocytic Lesion Diagnosis in Whole Slide Images”, presents the first automatic diagnosis tool for spitzoid lesions, allowing both the tumor region selection and its final diagnosis, i.e. malignant or benign. This paper was recently accepted at the Artificial Intelligence In Medicine (AIIM) journal and is pending to be published.

In the last months, I focused on the development of deep learning models that aim to mimic the steps undertaken by pathologists when analyzing a biopsy. More precisely, one of the methods used by pathologists starts with observing the biopsy from a bird’s eye view, before focusing on the more relevant areas at a higher resolution. This AI approach thus consists in starting with a rough segmentation of the tumorous area of a whole-slide image, before focusing on patches of regions that are more relevant.

Next steps in the project will involve a more precise analysis of Spitz tumors of uncertain malignant potential (STUMPs), which represent one of the most challenging skin lesions due to their ambiguous clinicopathological features. 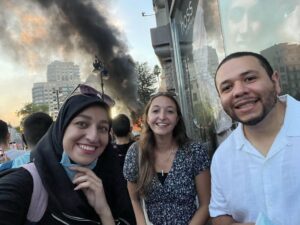 With Zahra (ESR9) and Andrés (ESR12) at the Fallas of Valencia 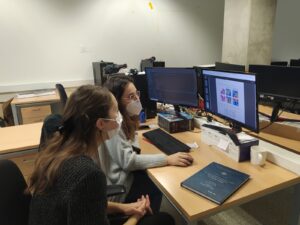 Working in collaboration with Rocío del Amor at the CVBLab