In the future, with this synergy between AI experts and pathologists as a team will lead new approaches in the classification and management of many diseases. Pathology is the bride between morphological and clinical medicine, an AI is the best way to build it.

In the context of our multidisciplinary team where of twelve ESRs in the Clarify Project only two of us are pathologists, I (Andrés, ESR12) considered important and pertinent give a lecture regarding the basics of pathology.

Time has revealed that Artificial Intelligence (AI) applied to health care systems is transcending and has all the potential to empower Pathology like never before. Public and private entities are showing their interest in AI with investments that will be more than $ 20 trillion by 2025.

Nowadays, with the use of AI, algorithms can be applied to integrate in an holistic way all the big data that the Anatomic Pathology Laboratory manage with the histopathology slides, immunohistochemistry and other molecular ancillary studies.

I believe that it is important to create a bond between pathologists and engineers. In addition, in order to make this possible, a way is trying to train them in the terminology used by pathologists. That is why in my lecture “Basics of Anatomical Pathology for Non-Physicians” as in Rembrandt’s famous work “Dr Nicolaes Tulp’s anatomy lesson”, I,  in a zoom meeting, presented this complex topic in the easiest and most understandable way possible.

Therefore, I started defining some basic concepts. For example the definition of tissue and what kind of tissues exist in the human body, some cancer nomenclature like “carcinoma” or “sarcoma”, the features that go in favor of either benign or malignant neoplasm. And finally I emphasized on the histological characteristics of a malignant neoplasm (mitosis, desmoplasia, invasion, etc).

The feedback of my presentation was quite positive from the other non-pathologists ESR´s. I think I accomplished my goal to give them a global introduction in the ambiguous field of pathology.

In the future this synergy between AI experts and pathologists as a team will lead to new approaches in the classification and management of many diseases. Pathology is the bridge between morphological and clinical medicine, an AI is the best way to build it. 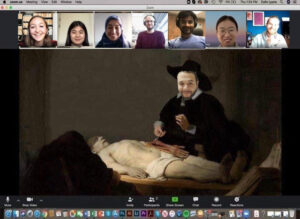