“It has become apparent over a period of years that even when a histologic diagnosis of malignant melanoma has been made in children the clinical behavior rarely has been that of a malignant tumor”.

Hi everyone! In this post, we (Andrés and Laëtitia) will talk about the clinical context of spitzoid cutaneous lesions, the tumors that we both aim to analyze throughout our Ph.D.s

A Spitz tumor (ST) is kind of a rare mole that appears in children and young people most of the time, but can also appear less often in adults or the elderly. Most of them have a very good outcome, but some of them have the behavior of a malignant aggressive tumor (melanoma).

This tumor was first described by Sophie Spitz, pathologist born in 1910 in Nashvile, Tenessee (USA). In her article called “Melanomas of Childhood” where she describes this entity, she starts writing this:

“It has become apparent over a period of years that even when a histologic diagnosis of malignant melanoma has been made in children the clinical behavior rarely has been that of a malignant tumor”.

This precious article, that has been referenced more than 700 times, also raises a series of questions that even today, almost a century later, have not been answered completely.

1-    Does the histologically malignant melanoma of children differ in any structural detail from that of adults?

2-    Can the clinical behavior of these lesions be predicted from their histologic structure?

3-    What, if any, are the factors known to influence the clinical behavior?

Nowadays this tumor is classified into three categories: Spitz nevus (the benign type of the ST´s), Spitz melanoma (the malignant type), and the Spitz tumor of uncertain malignant potential. But it is important to know that over the years, different approaches have been made to create a classification that not only describes the cytological and structural patterns of the ST but also to have a prognostic importance.  However, despite these efforts, this tumor is still a mystery.

The first approach was histological. But despite trying to separate the morphological features of a conventional malignant melanoma, some of them are indistinguishable, making it really hard to diagnose them. Then the extraction of the sentinel lymph node was proposed to see if there was any infiltration of the ST. Now it is known that more than 1/3 of the ST can have lymph node “metastasis” and still doesn’t behave as a melanoma. The genetic and genomic approach has been very helpful to understand the nature of this tumors but still it doesn’t resolve the problem of all the ST due to overlapping of many mutations with other melanomas and nevus, the difficulty to associate this genetic abnormalities to the histological features and the lack of evidence about predicting the prognosis.

In Clarify, we have a great multidisciplinary team and we strongly believe the project will accomplish this bold objective using this technological tool.

In the next post, we (Laëtitia and Andrés) will go into detail about how we plan to tackle this challenge, from the point of view of both a pathologist and an engineer. Stay tuned! 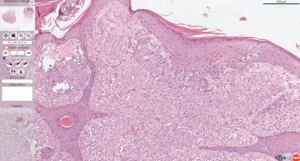 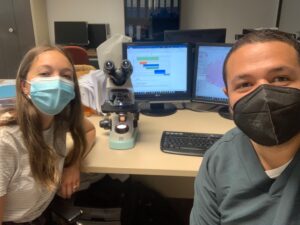